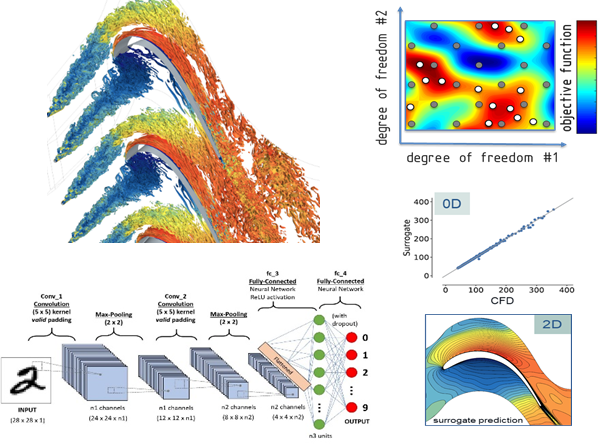 Among the objectives of the turbine pilot of the ACROSS project, there is the development of new artificial intelligence (AI) tools that can support the design and development of new greener aircraft engines. The need to develop these tools comes from the desire to extract and manage increasingly large amounts of information, in order to exploit as much as possible the content of the results of the onerous numerical simulations, conducted to analyze and optimize those aerodynamic components of the engine. In this context, it is easy to understand the hidden value contained in the data the designer wants to analyze and the strategic importance of knowing how to use them.

During the project, new tools will therefore be introduced into the complex turbine workflow, which will allow:

The main purpose is to follow the development trend observed globally and exploit the resources made available by the communities of well-known open platforms, such as TensorFlow or PyTorch, which are supported by an “infinite” number of developers. Following this approach will allow to move toward the use of modern programming languages, such as Python and Java, and standardize the data exchange between different tools, making it easier and faster to use these tools on different hardware and software platforms. Furthermore, it will allow using the most modern machine learning/deep learning libraries, to exploit the parallelism in the execution of these tools on HPC architectures (e.g., CPU, GPU and FPGA), with the idea of exploiting the exascale hardware structures that will be developed within the ACROSS project from technical work packages, and aiming at experimentation on virtual machines that will simulate the behaviour of futuristic hardware such as neuromorphic processors.

An important phase will concern the comparison between the performance of the newly developed tools and more traditional ones. This phase will represent a crucial aspect, as it will highlight the advantages or disadvantages that will be obtained, for example, in the training time and inference of the AI model, or on the accuracy of the same tools in the prediction of the outputs on data never used in the training phases.